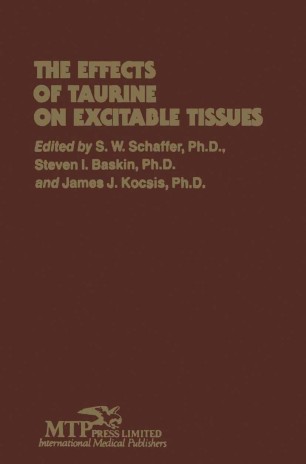 The Effects of Taurine on Excitable Tissues

Proceedings of the 21st Annual A. N. Richards Symposium of the Physiological Society of Philadelphia, Valley Forge, Pennsylvania, April 23–24, 1979

Part of the Monographs of the Physiological Society of Philadelphia book series (MPSP, volume 7)

It has become an annual custom for the Physiological Society of Philadel­ phia to sponsor a spring symposium in honor of A. N. Richards (\876-1966), a research pharmacologist who developed the classical micropuncture tech­ nique for studying kidney function. The A. N. Richards Symposium for 1979 was held on April 23-24 in Valley Forge, Pennsylvania. The theme of this symposium was "The Actions of Taurine on Excitable Tissues." Although taurine was discovered as a constituent of bile salts in 1857 by a chemist and an anatomist (Gmelin and Tiedemann), interest today centers chiefly on the extrahepatic actions of taurine, especially in brain, heart, and other excitable tissues. Research on taurine is clearly in a period of exponential growth. We can be sure that the research reports presented and described herein as the "Proceedings of the Symposium" will provide impetus for further growth. Thus the report describing macromolecular receptors for taurine in myocardial sarcolemma may provide a model for exploring the molecular mechanisms that underlie the action(s) of taurine. Stabilization of mem­ branes and modulation of ion fluxes are two fundamental actions of taurine dealt with in many of these reports. It is just these actions of taurine that have been reported by several investigators as being involved in human myotonia, diabetes, and heart failure.