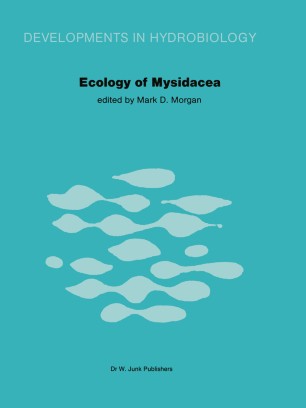 Part of the Developments in Hydrobiology book series (DIHY, volume 10)

The origins of this volume date back to the 1978 American Society of Limnology and Oceanography (ASLO) meetings in Victoria, British Columbia. Interest in the ecology of mysids, particularly Mysis relieta. was growing rapidly, so a meeting of active workers was held at the ASLO conference. Although the small group of researchers attending that first meeting were primarily North American and interested in Mysis relieta. the group quickly expanded to include researchers from every continent with interests in all aspects of mysid biology (see Appendix). The group, informally called the Mysid Research Group, formed to serve two basic functions·. The first was to facilitate communication among mysid researchers by publishing a member­ ship list and periodic newsletters. The second was to organize an international symposium on mysid ecology. After several false starts, a symposium was successfully held in conjunction with the 1981 ASLO meetings in Milwaukee, Wisconsin. The symposium lasted over parts of two days with an evening workshop the second day. Altogether, 1 poster and 21 oral presentations were given by 42 researchers. This volume is an outgrowth of that symposium and includes 15 of the papers originally presented at the conference. In order to make the volume as comprehensive as possible, contributions from individuals who could not attend the symposium were solicited. Thus, a total of 22 original contributions make up the present work.