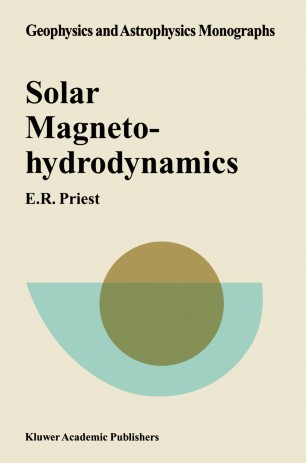 I have felt the need for a book on the theory of solar magnetic fields for some time now. Most books about the Sun are written by observers or by theorists from other branches of solar physics, whereas those on magnetohydrodynamics do not deal extensively with solar applications. I had thought of waiting a few decades before attempting to put pen to paper, but one summer Josip Kleczek encouraged an im­ mediate start 'while your ideas are still fresh'. The book grew out of a postgraduate lecture course at St Andrews, and the resulting period of gestation or 'being with monograph' has lasted several years. The Sun is an amazing object, which has continued to reveal completely unexpected features when observed in greater detail or at new wavelengths. What riches would be in store for us if we could view other stars with as much precision! Stellar physics itself is benefiting greatly from solar discoveries, but, in tum, our understanding of many solar phenomena (such as sunspots, sunspot cycles, the corona and the solar wind) will undoubtedly increase in the future due to their observation under different conditions in other stars. In the 'old days' the solar atmosphere was regarded as a static, plane-parallel structure, heated by the dissipation of sound waves and with its upper layer expanding in a spherically symmetric manner as the solar wind. Outside of sunspots the magnetic field was thOUght to be unimportant with a weak uniform value of a few gauss.

`The book should be eminently suitable for a course in solar physics. Also it provides a comprehensive review of present magnetohydrodynamical models in solar physics, which will be quite useful for workers in the field. Finally, the book is strongly recommended to the rapidly growing number of astrophysicists studying magnetically active stars.' Science
`...belongs on the desk of every astrophysicist interested in active objects, whether stars or galaxies. It should go without saying that the book is also an excellent text for a graduate on magnetohydrodynamics.' Nature
`Professor Priest has succeeded in writing a lucid and thorough introductory in the fascinating field of Solar Magnetohydrodynamics that is of great value to students and researchers in the field. It is easily accessible to researchers in peripheral astrophysical disciplines such as stellar atmospheres and extragalactic physics. This monograph can be recommended as the textbook in this field.' Space Science Reviews
`...only very rarely do I feel delighted to receive a particular book. Eric Priest's book is nevertheless one such instance. It is a very solid production both on the part of the author who has provided the best part of 500 pages and the publisher who has matched the author's effort with a well presented text and illustrations.' Planetary Space Science
`Professor Priest had constructed an impressively coherent textbook. As an account of solar magnetism, or a demonstration of the applied-mathematical approach in astrophysics it can be strongly recommended.' Journal of Fluid Mechanics, 155 (1985)