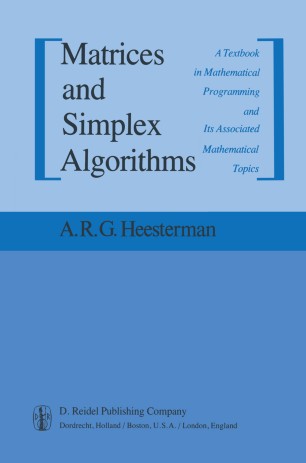 This is a textbook devoted to mathematical programming algorithms and the mathematics needed to understand such algorithms. It was mainly written for economists, but the mathematics itself obviously has relevance for other disciplines. It is a textbook as well a~ in parts, a contribution to new knowledge. There is, accordingly, a broad ordering of climbing sophistication, the earlier chapters being purely for the student, the later chapters being more specialist and containing some element of novelty on certain points. The book is edited in five parts. Part I deals with elementary matrix operations, matrix inversion, determinants, etc. Part II is mainly devoted to linear programming. As far as students' readability is concerned, these two parts are elementary undergraduate material. However, I would claim, in particular with respect to linear programming, that I do things more efficiently than the standard textbook approach has it. This refers mainly to the search for a feasible solution i.e. Chapter 9, and to upper and lower limits, i.e. Chapter 10. I have also argued that the standard textbook treatment of degeneracy misses a relevant problem, namely that of accuracy. In short, I would invite anyone who has the task of writing or designing an LP-code, to first acquaint himself with my ideas. viii INTRODUCTION Parts III and IV are concerned with nonlinear programming.