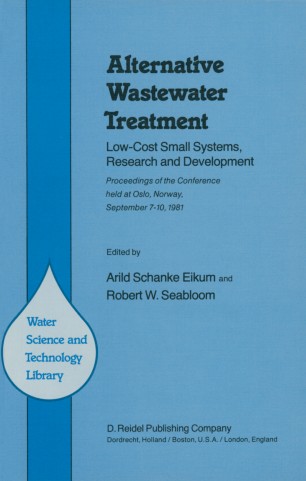 Following the end of World War II there was a major migra­ tion of population in the United States and Scandinavian countries to urban areas. As a result of this migration and in part due to the public works moratoria imposed during the war, a major pro­ gram of sewer construction was instigated, which resulted in the collection and subsequent concentration of large volumes of waste­ water at single discharge points. As the assimilative capacity of these receiving waters was exceeded, it led to or aggravated existing water pollution problems in these waters. To mitigate this degradation of water quality a massive program to construct wastewater treatment facilities was instigated. In addition, large amounts of money were spent on research to improve the technology of the conventional collection and treatment concept. In contrast, the wastewater disposal problem of the rural home owner received little attention, and in most cases the septic tank soil absorption system (ST-SAS) was the interim solution. In recent years there has been a fundamental change in the population growth pattern in the US and Scandinavian countries. It appears that a great many people are moving back to rural areas where they seem to prefer the suburban or small town envi­ ronment, yet at the same time want all the conveniences of urban life. The provision of proper wastewater disposal facilities presents a very perplexing problem, because the capital and operating costs of conventional sewers are usually financially impractical for rural areas.