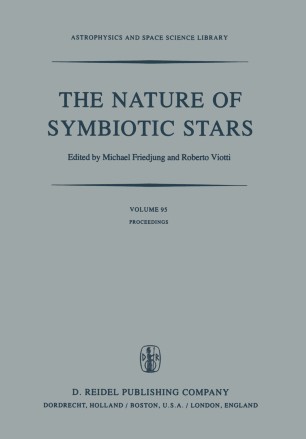 The Nature of Symbiotic Stars

Proceedings of IAU Colloquium No. 70 Held at the Observatoire De Haute Provence, 26–28 August, 1981

Many aspects of symbiotic stars have long puzzled astronomers. For instance while most students of the subject have considered them binary, many have at different times supported single star models. The nature of their outbursts is uncertain, while the dividing line between symbiotic stars and novae is unclear. In any case doubts can even be raised as to whether a class of "Symbiotic Stars" really exists. Much new data has been obtained in recent years, in particular from the study of radiation outside the visual region. Many symbiotic stars have been studied in the UV with IUE since 1978, while X-rays were det­ ected in a few cases with the Einstein satellite. There have been a num­ ber of infrared and radio studies, and the number of known symbiotic stars has also considerably increased. Furthermore theoretical ideas have in recent years been considerably enriched by concepts of stellar winds, and accretion phenomena in binaries including accretion disks. It was there­ fore extremely opportune and timely to hold the first international meet­ ing exclusively devoted to these stars, so as to consider the new results from such a wide range of observations in different spectral regions, and the conclusions which can be drawn for possible models as well as theories of the nature and structure of symbiotic stars. After a session devoted to new observations in different spectral regions, a session was spent considering some individual stars.