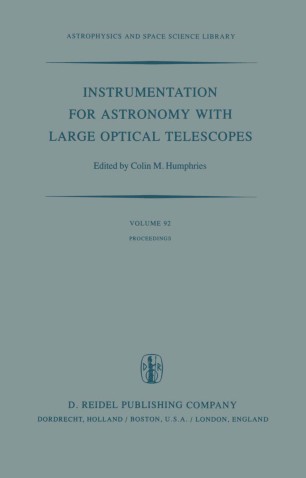 Interest world-wide in the provision of new observational astro­ nomical facilities in the form of ground-based optical telescopes of large aperture has never been higher than exists at present. The benefits to be gained from increased aperture size, however, are only utilised effectively if efficient instrumentation is also available. There have been significant improvements recently in this area, part­ icularly in detector technology and data handling as well as in optical design, so that systems which are currently being developed have the capability of being vastly more powerful in terms of the efficient use of photons than those which existed only 5 years ago. The rationale for the decision by Commission 9 of the International Astronomical Union to hold IAU Colloquium 67, therefore, was to obtain reports on these developments with the emphasis placed upon overall efficiency of the complete observational system - from telescope aperture right through to detector output. A fitting venue for the meeting was the site of the 6 metre BTA (Bolshoi Azimuth Telescope) at Zelenchukskaya in the Caucasus mount­ ains, USSR. The BTA is operated by the Special Astrophysical Observatory located at Nizhnij Arkhyz, a few kilometres from the telescope itself.