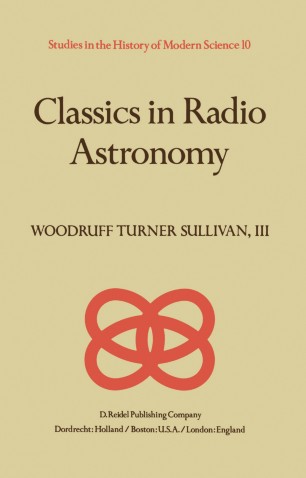 Part of the Studies in the History of Modern Science book series (SHMS, volume 10)

Radio techniques were the nrst to lead astronomy away from the quiescent and limited Universe revealed by traditional observations at optical wave­ lengths. In the earliest days of radio astronomy, a handful of radio physicists and engineers made one startling discovery after another as they opened up the radio sky. With this collection of classic papers and the extensive intro­ ductory material, the reader can experience these exciting discoveries, as well as understand the developing techniques and follow the motivations which prompted the various lines of inquiry. For instance he or she will follow in detail the several attempts to detect radio waves from the sun at the turn of the century; the unravelling by Jansky of a "steady hiss type static"; the incredible story of Reber who built a 9 meter dish in his backyard in 1937 and then mapped the Milky Way; the vital discoveries by Hey and colleagues of radio bursts from the Sun and of a discrete source in the constellation of Cygnus; the development of receivers and interferometry in the post-war years by the groups led by Ryle in Cambridge and Pawsey in Sydney; the nrst measurements and exciting identiftcations of Taurus A (the Crab Nebula), Centaurus A, Virgo A, Cassiopeia A, and Cygnus A, the last opening the neld of radio cosmology; the early development of synchroton theory; and the prediction and discovery seven years later of the 21 cm line of neutral hy­ drogen.