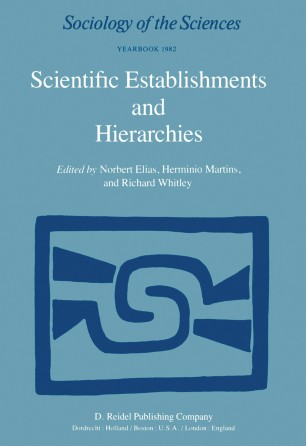 Part of the Sociology of the Sciences a Yearbook book series (SOSC, volume 6)

In recent years sociologists of sciences have become more interested in scien­ tific elites, in the way they direct and control the development of sciences and, beyond that, in which the organization of research facilities and resources generally affects research strategies and goals. In this volume we focus on scientific establishments and hierarchies as a means of bringing aspects of these concerns together in their historical and comparative contexts. These terms draw attention to the fact that much scientific work has been pursued within a highly specific organizational setting, that of universities and aca­ demic research institutes. The effects of this organizational setting as well as its power relations, and its resources in relation to governmental and other non-scientific establishments in society at large, deserve closer attention. One significant aspect of scientific establishments and hierarchies and of the power relations impinging upon scientific research, is the fact that the bulk of leading scientists have the professional career, qualifications and status of a professor. As heads or senior members of departments, institutes and laboratories, professors form the ruling groups of scientific work. They are the main defenders of scientific - or departmental - autonomy, accept or resist innovations in their field, play a leading part in fighting scientific controversies or establishing consensus. Even where research units are not directly controlled by professors, authority structures usually remain strongly hierarchical. These hierarchies too deserve attention in any explora­ tion of the social characteristics of scientific knowledge and its production.