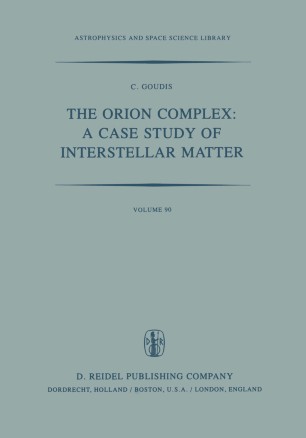 The Orion Complex: A Case Study of Interstellar Matter

This work deals with some of the most typical complexes of interstellar matter and is intended to serve both as a reference book for the specialist and as an introduction for the newcomer to the field. It is hoped to meet the first aim by presenting a holistic view of the well studied complexes in Orion, built on information derived from various branches of modern Astrophysics. The wealth of published data is presented in the form of photographs, contour maps, diagrams and numerous heavily annotated tables. The second aim is pursued by providing an outline of the complexes, the physical problems associated with them, the empirical models describing their be­ haviour and, in addition, by including an extended Appendix section summarizing the numerous methods employed to derive the physical parameters of an H II region and the dust and molecular cloud physically associated with it. The book consists of five chapters and four Appendix sections. Chapter 1, which is concerned with the large scale view of the Orion region, outlines the morphology of the area and examines in particular the nature of Barnard's Loop and the associated filamentary structure in addition to the origin of the I Orion OB association. Chapter 2 focuses on the ionized gas of the Orion H II/molecular complex i. e.