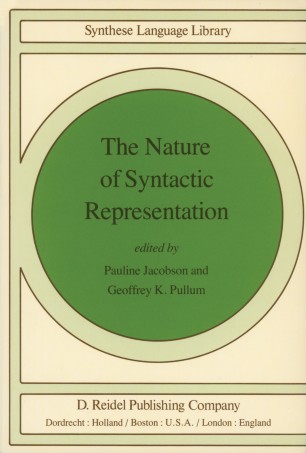 The Nature of Syntactic Representation

The work collected in this book represents the results of some intensive recent work on the syntax of natural languages. The authors' differing viewpoints have in common the program of revising current conceptions of syntactic representation so that the role of transformational derivations is reduced or eliminated. The fact that the papers cross-refer to each other a good deal, and that authors assuming quite different fram{:works are aware of each other's results and address themselves to shared problems, is partly the result of a conference on the nature of syntactic representation that was held at Brown University in May 1979 with the express purpose of bringing together different lines of research in syntax. The papers in this volume mostly arise out of work that was presented in preliminary form at that conference, though much rewriting and further research has been done in the interim period. Two papers are included because although they were not given even in preliminary form at the conference, it has become clear since then that they interrelate with the work of the conference so much that they cannot reasonably be left out: Gerald Gazdar's statement of his program for phrase structure description of natural language forms the theoretical basis that is assumed by Maling and Zaenen and by Sag, and David Dowty's paper represents a bridge between the relational grammar exemplified here in the papers by Perlmutter and Postal on the one hand and the Montague­