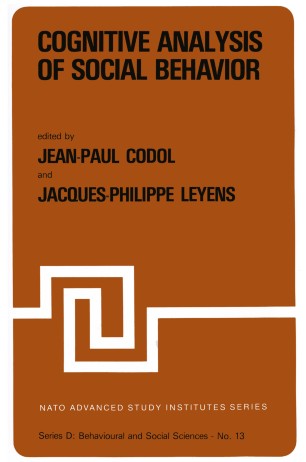 The fifth Summer School organized by the European Associa­ tion of Experimental Social Psychology was held in Aix-en-Proven­ ce (France, from July 12 to 31, 1981. Previous schools had taken place in The Hague (The Nederlands) in 1966, Leuven (Belgium) in 1967, Konstanz (Germany) in 1972 and in Oxford (Great-Britain) in 1976. This is an important activity of the European Association and has always met with great success. This time, 130 applica­ tions were received while only 50 could be accepted, given the format adopted for the Summer School. They represented many different countries and institutions. To fully understand the aims of such a Summer School, es­ pecially of the present one, it is probably best to consider first its organization. Participants were graduates or young postdoctoral students in experimental social psychology. For three weeks they worked in five teams of ten participants each under the mentorship of a senior researcher. Each of five staff members had suggested a special topic of study in which they were interested, well be­ fore the start of the session. This enabled the teams to be de­ termined early enough for the participants to be able to prepare for the sessions. In Aix, in the magnificent surroundings of an old convent, afternoons (and often evenings as well) were spent discussing theoretical issues arising from the suggested topics and in planning research to test specific hypotheses.