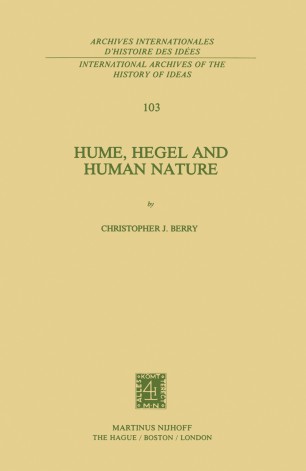 This is both a modest and a presumptuous work. It is presumptuous because, given the vast literature on just one of its themes, it attempts to discuss not only the philosophies of both Hume and Hegel but also something of their intellectual milieu. Moreover, though the study has a delimiting perspective in the relation­ ship between a theory of human nature and an account of the various aspects that make up social experience, this itself is so central and protean that it has necessitated a discussion of, amongst others, theories of history, language, aesthetics, law and politics. Yet it is a modest work in that, although I do think I have some fresh things to say, the study does not propose any revolutionary new reading of the material. I am not here interested in the relative validity of the theories put forward - I do not 'take sides'. Nevertheless it is part of the modest intent that recourse to Hume and Hegel in arguments pertaining to human nature will be better inform­ ed and more discriminating as a consequence of this study. Additionally, some distinctions herein made also shed light on some assumptions made in contem­ porary debates in the philosophy of social science, especially those concerning the understanding of alien belief-systems.