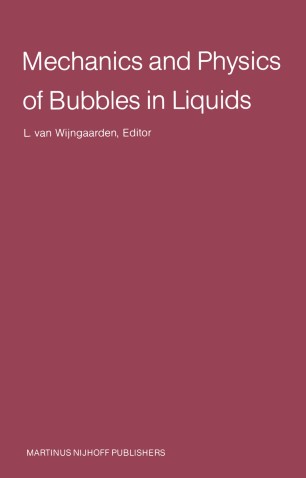 Mechanics and Physics of Bubbles in Liquids

A IUTAM (International Union of Theoretical and Applied Mechanics) Sympo­ sium 'Mechanics and Physics of Bubbles in Liquids' was held at Pasadena, Calif., USA from 15 through 19 June 1981. The present volume contains the printed version of nearly all papers read at the Symposium. The study of the behaviour of bubbles in liquids was originally stimu­ lated by problems in cavitation and in boiling ofliquids. Today research is initiated by problems in many other fields as well. In this respect a growing interest from the side of biomechanics may be mentioned. Ordering of the papers could be done either according to the various mechanical and physical aspects of the subject or according to the fields of application. The presentaton at the Symposium contained a bit of both; there was a session on physico-chemical aspects for example and also a session on biological applications. The subdivision in this volume follows roughly the sessions in the Symposium. Most of them start with a paper of a survey nature, reporting progress made in recent years. Here, as in other fields of engineering science, one notes the important part played by experimental techniques and by numerical analysis.