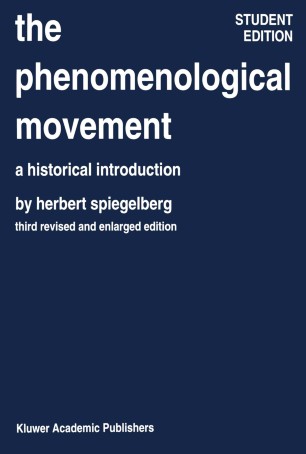 The present attempt to introduce the general philosophical reader to the Phenomenological Movement by way of its history has itself a history which is pertinent to its objective. It may suitably be opened by the following excerpts from a review which Herbert W. Schneider of Columbia University, the Head of the Division for International Cultural Cooperation, Department of Cultural Activities of Unesco from 1953 to 56, wrote in 1950 from France: The influence of Husserl has revolutionized continental philosophies, not because his philosophy has become dominant, but because any philosophy now seeks to accommodate itself to, and express itself in, phenomenological method. It is the sine qua non of critical respectability. In America, on the contrary, phenomenology is in its infancy. The average American student of philosophy, when he picks up a recent volume of philosophy published on the continent of Europe, must first learn the "tricks" of the phenomenological trade and then translate as best he can the real impon of what is said into the kind of imalysis with which he is familiar . . . . No doubt, American education will graduaUy take account of the spread of phenomenological method and terminology, but until it does, American readers of European philosophy have a severe handicap; and this applies not only to existentialism but to almost all current philosophical literature. ' These sentences clearly implied a challenge, if not a mandate, to all those who by background and interpretive ability were in a position to meet it.