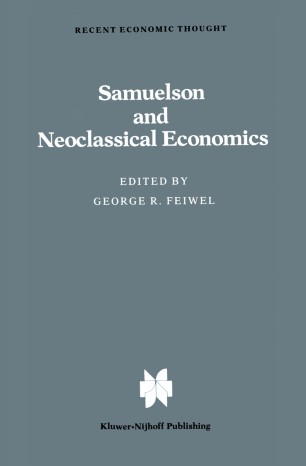 This is not a festschrift, but a study of the prodigious Samuelson phe­ nomenon, his history-making contributions to and impact on the econom­ ics of our age, and the intricate, often perplexing, and divergent trends in modern economics - all intensely controversial subjects that will be argued, scrutinized, and periodically reassessed by economists of various strands and traditions for years to come, for, as Samuelson wrote of Pigou, "immortality does have its price. " A scholar with such an out­ standing body of contributions "must expect other men to swarm about it" (1966, p. 1233), subject it to scholarly scrutiny, and challenge it. Although Paul Samuelson was 65 on May 15, 1980 (and our best wishes go out to him for long life and continued enrichment of economics), this is neither a birthday party nor a gathering of only the Good Fairies, for, as he himself has said of Marx, "a great scholar deserves the compliment of being judged seriously" and critically (1972, p. 268). In accordance with the rule of Roman law, audiatur et altera pars, I have invited representative scholars of widely divergent perceptions to offer their critical evaluation of the "age of Samuelson. " While the response was by and large gratifying, some scholars were unable to meet the deadline, ix x PREFACE and with much compunction I have had to expand my own essays to partly fill the gaps.