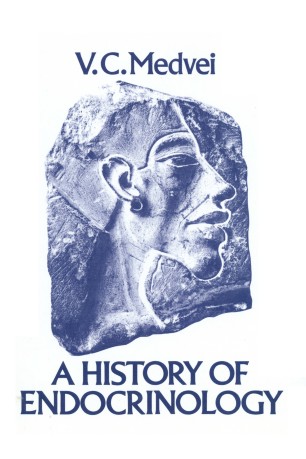 A History of Endocrinology

o history of endocrinology can be written without reference N to Sir Humphry Davy Rolleston, whose monumental study of the subject appeared in 1936 under the modest subtitle: The Endocrine Organs in Health and Disease with an Historical Review. It was based on the author's Fitzpatrick Lectures at the Royal College of Physicians of London in 1933 and 1934. The lectureship, which dates from 1901, is devoted to the History of Medicine. Rolleston's work as regards scholarship and delivery cannot be surpassed and will remain the solid basis for any further study. It is of interest to note that Rolleston gave the Fitzpatrick Lectures when he was 71 years of age and had his book published when he was 74. By that time he had achieved most of his professional aims and all the honours a distinguished medical career can offer (see Section II). He perceived clearly that endocrinology was "an enormous subject in a most active stage of growth", which "recently has received most valuable help from organic chemists, who have devoted much time to the elucidation of the structure, isolation and synthesis of the hormones". He remarked that the knowledge of endocrinology was expanding with extreme rapidity, and it has been suggested that in this respect it would appear to be itself influenced by a growth hormone. He continued: "Before 1890 there were comparatively few publications dealing with the ductless glands, but in 1913, A.