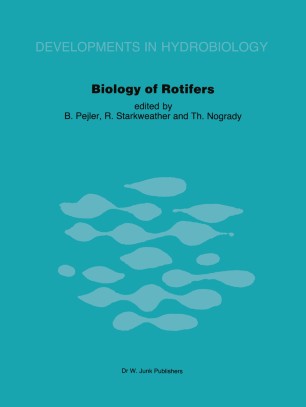 Part of the Developments in Hydrobiology book series (DIHY, volume 14)

Since the two previous rotifer symposia in Lunz and Gent were highly successful, it was considered important to continue the tradition every third year. Thus a third rotifer symposium was held in Uppsala, Sweden, Aug. 30-Sept. 4, 1982. In the beginning of 1981 the first circular was mailed to the participants of the previous symposia, who in turn were requested to suggest names of other scientists to be invited. As a result many people expressed interest, about 70 of whom finally participated in the symposium (not including temporary visitors from nearby). The participants represented 22 countries, in Europe, North America, Asia and Australia. As with the earlier symposia, some subjects were selected in advance, mainly during discussions between Henri Dumont, Birger Pejler and Peter Starkweather when they met at the SIL congress in Kyoto 1980. Some broad topics such as 'Marine rotifers' were covered for the first time, while other topics were continuations, though more specialized, of previous themes. Thus it is interesting to follow, through the three symposium volumes, recent development within the areas of feeding, popUlation dynamics and ultrastructure. Each prospective participant (with the exception of the reviewers) was invited to present one short paper (alone or with collaborators), which resulted in more than 40 such contributions. Thus, the week's schedule became very crowded, unfortunately leaving no time for more comprehensive workshops etc. However, during the evenings general discussions were held on the topics presented during the day.