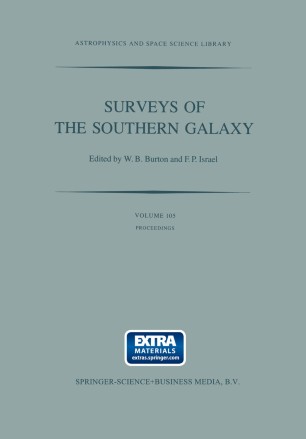 Surveys of the Southern Galaxy

Proceedings of a Workshop Held at the Leiden Observatory, The Netherlands, August 4–6, 1982

Problems associated with a general scarcity of observations of the southern sky have persisted since the present era of galactic research began some sixty years ago. In his 1930 Halley Lecture A. S. Eddington commented on the observational support given to J. H. Oort's theory of galactic rotation by the stellar radial velocities measured by Plaskett o 0 and Pearce: " . . . out of 250 stars only 4 were between 193 and 343 0 galactic longitude [=£1: 225 < £11 < 15~; a stretch of one-third of the whole circuit was unrepresented by a single star. This is the operation which Kapteyn used to describe as "flying with one wing". By mathematical dexterity the required constants of rotation have been extracted from the lopsided data; but no mathematical dexterity can avert the possi­ bility that the neglected part of the sky may spring an unpleasant sur­ prise. As a spectator I watch the achievements of our monopterous avia­ tors with keen enthusiasm; but I confess to a feeling of nervousness when my turn comes to depend on this mode of progression. " During the past few years substantial gains have been made in securing fundamental data on the southern sky. Interpretations based on combined southern and northern surveys are producing a balanced descrip­ tion of galactic morphology. These matters were discussed at a Workshop held at the Leiden Observatory, August 4-6, 1982, attended by some 60 astronomers from 9 countries.