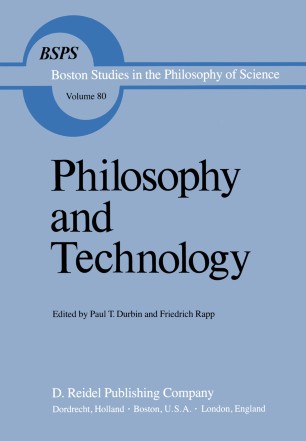 Part of the Boston Studies in the Philosophy of Science book series (BSPS, volume 80)

Only recently has the phenomenon of technology become an object of in­ terest for philosophers. The first attempts at a philosophy of technology date back scarcely a hundred years - a span of time extremely short when com­ pared with the antiquity of philosophical reflections on nature, science, and society. Over that hundred-year span, speculative, critical, and empiricist approaches of various sorts have been put forward. Nevertheless, even now there remains a broad gap between the importance of technology in the real world and the sparse number of philosophical works dedicated to the under­ standing of modern technology. As a result of the complex structure of modern technology, it can be dealt with in very different ways. These range from metaphysical exposition to efforts aimed at political consensus. Quite naturally, within such a broad range, certain national accents can be discovered-; they are shaped by a com­ mon language, accepted philosophical traditions, and concrete problems requiring consideration. Even so, the worldwide impact of technology, its penetration into all spheres of individual, social, and cultural life, together with the urgency of the problems raised in this context - all these demand a joint philosophical discussion that transcends the barriers of language and cultural differences. The papers printed here are intended to exemplify such an effort at culture-transcending philosophical discussion.