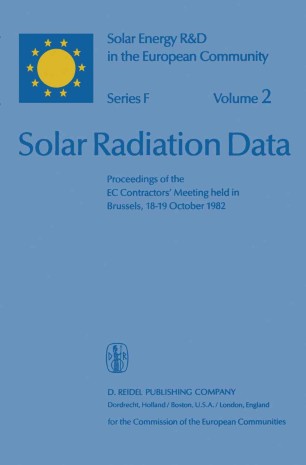 Proceedings of the EC Contractors’ Meeting held in Brussels, 18–19 October 1982

This book gives a comprehensive overview of activities currently under way to produce, collect and compile radiation data as needed for the various types of solar energy applications in Europe. Contributions have been made by all contractors of the Commission of the European Communities, in par­ ticular the Meteorological Offices of the EC member countries. They all re­ ported on their work at a meeting which was held in October 1982 in Brussels and of which these are the proceedings. The Commission' work in this area follows a detailed strategy which was published earlier as part of the proceedings of Volume I, Series F. Series F is especially devoted to publications on the European Communities' work on solar radiation data. Other volumes within Series F are in preparation and will deal with: - solar radiation data on tilted planes; - solar radiation data derived from meteorological satellite obs- tions. In addition, two new atlases are being prepared, one showing - for the area of the European Community - maps for solar radiation on titled planes of various inclinations and orientations, and the other showing - for the whole of Europe and the Eastern part of the Mediterranean - radiation data for horizontal planes. In the latter there will also be a statistical analy­ sis section. Both atlases will be published in the course of 1983.