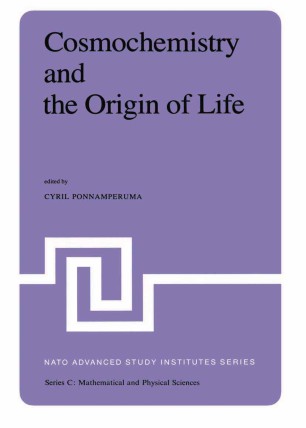 Cosmochemistry and the Origin of Life

For the first time in human history, developments in many branches of science provide us with an opportunity of formula­ ting a comprehensive picture of the universe from its beginning to the present time. It is an awesome reflection that the carbon in our bodies is the very carbon which was generated during the birth of a star. There is a perceptible continuum through the billions of years which can be revealed by the study of chemistry. Studies in nucleosynthesis have related the origin of the elements to the life history of the stars. The chemical elements we find on earth, HYdrogen, Carbon, Oxygen, and Nitrogen, were created in astronomical processes that took place in the past, and these elements are not spread throughout space in the form of stars and galaxies. Radioastronomers have discovered a vast array of organic molecules in the interstellar medium which have a bearing on prebiological chemical processes. Many of the molecules found so far contain the four elements, C, N, 0, H. Except for the chem­ ically unreactive He, these four elements are the most abundant in the galaxy. The origin of polyatomic interstellar molecules is an unresolved problem. While we can explain the formation of some diatomic molecules as due to two atom collisions, it is much more difficult to form polyatomic molecules by collisions between diatomic molecules and atoms. There may be other produc­ tion mechanisms at work such as reactions taking place on the surface of interstellar dust grains.

`This volume cannot be too highly commended. It provides the perfect antidote to the reams of speculative nonsense that flows from the pens of people, who should know better, and it also provides basic information, which can be communicated to serious intelligent people, who are always asking palaeontologists and evolutionists about the mystery of the origin of life. This volume ably demonstrates that although the mystery remains, it is much less mysterious than most people imagine; it deserves a place on the shelf of every palaeontologist.'
The Palaeontological Association Circular