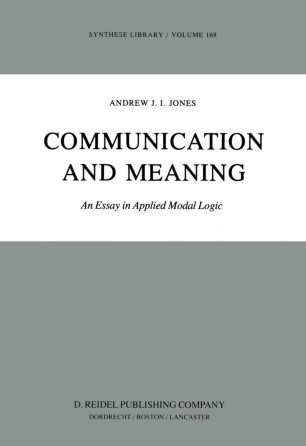 An Essay in Applied Modal Logic

This essay contains material which will hopefully be of interest not only to philosophers, but also to those social scientists whose research concerns the analysis of communication, verbal or non-verbal. Although most of the topics taken up here are central to issues in the philosophy of language, they are, in my opinion, indistinguishable from topics in descriptive social psychology. The essay aims to provide a conceptual framework within which various key aspects of communication can be described, and it presents a formal language, using techniques from modern modal logic, in which such descriptions can themselves be formulated. It is my hope that this framework, or parts of it, might also turn out to be of value in future empirical work. There are, therefore, essentially two sides to this essay: the development of a framework of concepts, and the construction of a formal language rich enough to express the elements of which that framework is composed. The first of these two takes its point of departure in the statement quoted from Lewis (1972) on the page preceding this introduction. The distinction drawn there by Lewis is accepted as a working hypothesis, and in one sense this essay may be seen as an attempt to explore some of the consequences of that hypothesis.