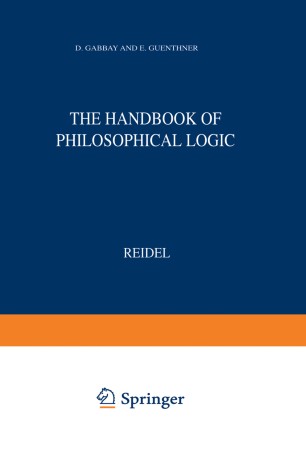 Volume I: Elements of Classical Logic

The aim of the first volume of the present Handbook of Philosophical Logic is essentially two-fold: First of all, the chapters in this volume should provide a concise overview of the main parts of classical logic. Second, these chapters are intended to present all the relevant background material necessary for the understanding of the contributions which are to follow in the next three volumes. We have thought it to be of importance that the connections between classical logic and its 'extensions' (covered in Volume 11) as well as its most important 'alternatives' (covered in Volume Ill) be brought out clearly from the start. The first chapter presents a clear and detailed picture of the range of what is generally taken to be the standard logical framework, namely, predicate (or first-order quantificational) logic. On the one hand, this chapter surveys both propositionai logic and first-order predicate logic and, on the other hand, presents the main metalogical results obtained for them. Chapter 1. 1 also contains a discussion of the limits of first-order logic, i. e. it presents an answer to the question: Why has predicate logic played such a formidable role in the formalization of mathematics and in the many areas of philo­ sophical and linguistic applications? Chapter 1. 1 is prerequisite for just about all the other chapters in the entire Handbook, while the other chapters in Volume I provide more detailed discussions of material developed or hinted at in the first chapter.