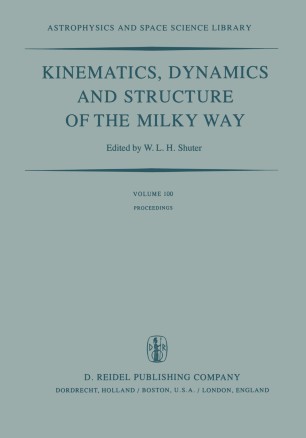 Kinematics, Dynamics and Structure of the Milky Way

The idea of holding this workshop on "The Jllilky Way" arose at the conference dinner of a meeting on "Regions of Recent Star Formation" held at Penticton in June 1981. Leo Blitz (now at the University of Maryland) and I decided that there was a need, and agreed that we would organize one in Vancouver in the Spring of 1982. The purpose of the workshop was to have an intensive exchange of ideas between some of the most active workers in the field regarding the recent work which has been significantly changing our concepts of the Milky Way. To achieve this we limited the number of participants, and planned the program so that there was ample time for discussion. The meeting appeared to work very well, both scientifically and socially, and this volume contains 50 of the 55 papers that were The discussion was very lengthy, but since the papers were presented. written up after the meeting many of the points raised have been in the publications, and it seems pointless to reproduce it incorporated here. Leo and I would like to thank the many people who helped to make the meeting a success: at UBC) and Frank J. Kerr (Provost of MPSE C.V. Finnegan (Dean of Science at the University of Maryland) who welcomed the participants on behalf of the sponsoring Universities. Bart Bok who opened the scientific proceedings, and Maarten Schmidt who gave the closing summary.