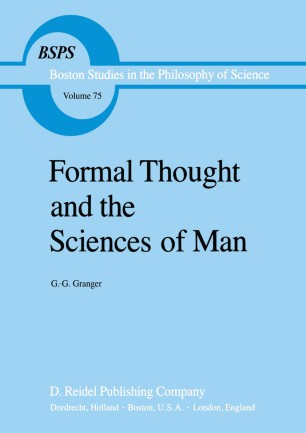 Formal Thought and the Sciences of Man

Part of the Boston Studies in the Philosophy of Science book series (BSPS, volume 75)

system reflected in Saussure's linguistic theory, and so influential in the great progress linguistic theory has made in this century. Indeed, Granger sees linguistic theory as expressing a paradigm for scientific theorizing, which research in other social sciences should adopt. But 'structuralism' as a method in science does not, in Granger's view, begin with Saussure and the linguists. It is nothing less than the strategy of all the sciences, both natural and social, since their beginnings. Now, 'structuralism' is a 'trendy' term no less in Anglophone methodology than in Francophone philosophy. But Granger's employment of the term is not to be assimilated to this trend, nor to the fashionable excesses for which this expression has been a watch­ word (he explicitly separates himself from this movement in the preface to the second edition). The exact nature of what Granger calls 'structuralist' methods is the subject of a large part of this work, and I will not dwell on it much further in this introduction. Suffice it to say that Granger's demand for structuralist description is nothing less than the recognition that the successful pursuit of science requires that its terms and predicates pick out what we may call 'natural kinds'; that is, describe classes of items that bear uniform nomolog­ ical relations to one another. A science whose descriptive terms do not meet this condition will never produce any laws that reflect such nomological connections.