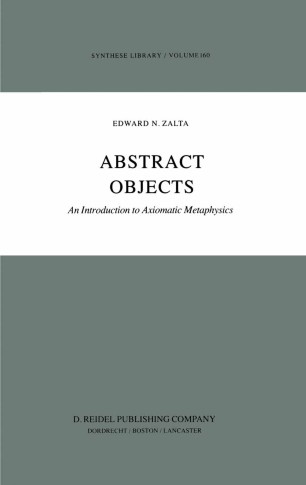 An Introduction to Axiomatic Metaphysics

In this book, I attempt to lay the axiomatic foundations of metaphysics by developing and applying a (formal) theory of abstract objects. The cornerstones include a principle which presents precise conditions under which there are abstract objects and a principle which says when apparently distinct such objects are in fact identical. The principles are constructed out of a basic set of primitive notions, which are identified at the end of the Introduction, just before the theorizing begins. The main reason for producing a theory which defines a logical space of abstract objects is that it may have a great deal of explanatory power. It is hoped that the data explained by means of the theory will be of interest to pure and applied metaphysicians, logicians and linguists, and pure and applied epistemologists. The ideas upon which the theory is based are not essentially new. They can be traced back to Alexius Meinong and his student, Ernst Mally, the two most influential members of a school of philosophers and psychologists working in Graz in the early part of the twentieth century. They investigated psychological, abstract and non-existent objects - a realm of objects which weren't being taken seriously by Anglo-American philoso­ phers in the Russell tradition. I first took the views of Meinong and Mally seriously in a course on metaphysics taught by Terence Parsons at the University of Massachusetts/Amherst in the Fall of 1978. Parsons had developed an axiomatic version of Meinong's naive theory of objects.