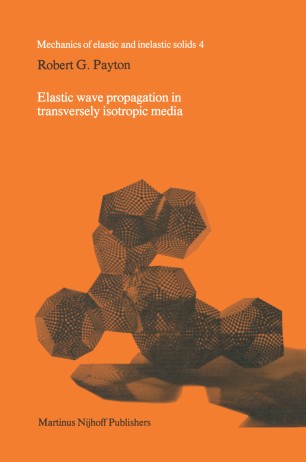 Part of the Mechanics of elastic and inelastic solids book series (MEIS, volume 4)

In this monograph I record those parts of the theory of transverse isotropic elastic wave propagation which lend themselves to an exact treatment, within the framework of linear theory. Emphasis is placed on transient wave motion problems in two- and three-dimensional unbounded and semibounded solids for which explicit results can be obtained, without resort to approximate methods of integration. The mathematical techniques used, many of which appear here in book form for the first time, will be of interest to applied mathematicians, engeneers and scientists whose specialty includes crystal acoustics, crystal optics, magnetogasdynamics, dislocation theory, seismology and fibre wound composites. My interest in the subject of anisotropic wave motion had its origin in the study of small deformations superposed on large deformations of elastic solids. By varying the initial stretch in a homogeneously deformed solid, it is possible to synthesize aniso­ tropic materials whose elastic parameters vary continuously. The range of the parameter variation is limited by stability considerations in the case of small deformations super­ posed on large deformation problems and (what is essentially the same thing) by the of hyperbolicity (solids whose parameters allow wave motion) for anisotropic notion solids. The full implication of hyperbolicity for anisotropic elastic solids has never been previously examined, and even now the constraints which it imposes on the elasticity constants have only been examined for the class of transversely isotropic (hexagonal crystals) materials.