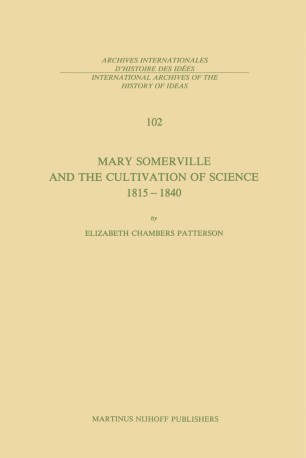 Mary Somerville and the Cultivation of Science, 1815–1840

Among the myriad of changes that took place in Great Britain in the first half of the nineteenth century, many of particular significance to the historian of science and to the social historian are discernible in that small segment of British society drawn together by a shared interest in natural phenomena and with sufficient leisure or opportunity to investigate and ponder them. This group, which never numbered more than a mere handful in comparison to the whole population, may rightly be characterized as 'scientific'. They and their successors came to occupy an increasingly important place in the intellectual, educational, and developing economic life of the nation. Well before the arrival of mid-century, natural philosophers and inventors were generally hailed as a source of national pride and of national prestige. Scientific society is a feature of nineteenth-century British life, the best being found in London, in the universities, in Edinburgh and Glasgow, and in a few scattered provincial centres.