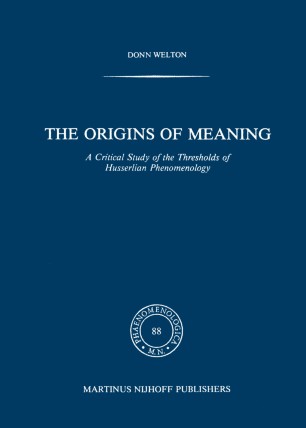 The Origins of Meaning

A Critical Study of the Thresholds of Husserlian Phenomenology

Whenever one attempts to write about a philosopher whose native tongue is not English the problem of translations is inevitable. For the sake of simplicity and accuracy we have translated all of our quotations from the German unless otherwise noted. But for the sake of easy reference we have included the page numbers of the English translations as well as the German texts. Because there is a new translation forthcoming, we have not included references to the English translation of Ideen I. Since the German texts are readily available, we did not reproduce them in the footnotes. All quotations translated from Husserl's unpublished manuscripts, however, do include the German text in the footnotes. This work is greatly indebted to the criticism and help of Professor Ludwig Landgrebe, whose support made possible two years at the UniversiHit Koln. Garth Gillan and Lothar Eley also have contributed much to the basic direction ofthis work. Others such as Edward Casey, Claude Evans, Irene Grypari, Don Ihde, Grant Johnson, Martin Lang, J. N. Mohanty, Robert Ray and Susan Wood have been more than helpful in their discussions with me on these topics and in their criticisms of some of the ambiguities of an earlier draft. Likewise a special word of thanks to Reto Parpan whose insightful corrections were most valuable and to Nancy Gifford for her discussions on matters epistemolo­ gical and for her help in the final preparation of the book.