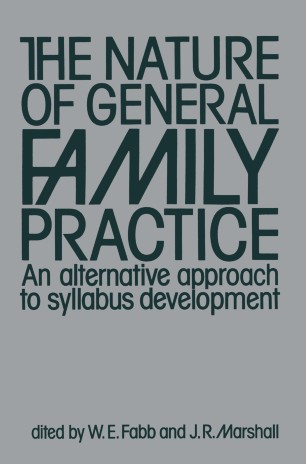 The Nature of General Family Practice

The idea of producing this book of case histories from general family prac­ tice was only a twinkle in the editors' eyes until October 1980, when in a room in the Marriott Hotel in New Orleans, the editors met with John Fry, Joseph Levenstein and Bill Jackson to discuss new book projects. The idea was put to the group, which endorsed it enthusiastically. Encouraged by this and by John Fry's advice, the conception of The Nature of General Family Practice took place. It was agreed that to illustrate the universal nature of general family prac­ tice it would be useful to collect case histories from all around the world, that for preference they should be brief, and that they should be ac­ companied by major questions and sub-questions, but no answers. The name 'Vignettes' was applied to these cases and their questions. Subsequently, well over a hundred family physicians were asked by letter to provide ten vignettes. Sixty doctors from ten countries accepted the invitation and forwarded their contributions during the second half of 1981. Almost all of those who, for a variety of reasons were unable to contribute, said they liked the idea and looked forward to using the final product. Altogether, over 600 vignettes were received, and 583 selected for final inclusion.