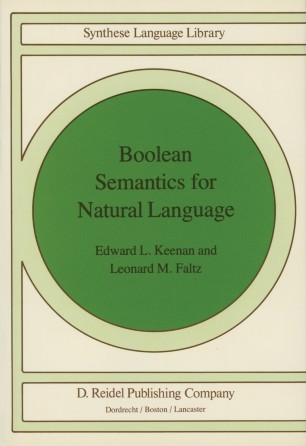 In the spring of 1978, one of the authors of this book was sitting in on a course in logic for linguists given by the other author. In attempting to present some of Montague's insights in an elementary way (hopefully avoid­ ing the notation which many find difficult at first), the authors began dis­ cussions aimed towards the construction of a simple model-theoretical semantic apparatus which could be applied directly to a small English-like language and used to illustrate the methods of formal logical interpretation. In these discussions two points impressed themselves on us. First, our task could be simplified by using boolean algebras and boolean homomorphisms in the models; and second, the boolean approach we were developing had much more widespread relevance to the logical structure of English than we first thought. During the summer and fall of 1978 we continued work on the system, proving the more fundamental theorems (including what we have come to call the Justification Theorem) and outlining the way in which an intensional interpretation scheme could be developed which made use of the boolean approach (which was originally strictly extensional). We presented our findings in a monograph (Keenan and Faltz, 1978) which the UCLA Linguistics Department kindly published as part of their series called Occa­ sional Papers in Linguistics; one of the authors also presented the system at a colloquium held at the Winter Meeting of the Linguistic Society of America in December 1978.