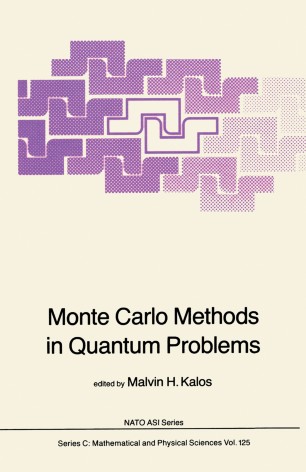 Monte Carlo methods have been a tool of theoretical and computational scientists for many years. In particular, the invention and percolation of the algorithm of Metropolis, Rosenbluth, Rosenbluth, Teller, and Teller sparked a rapid growth of applications to classical statistical mechanics. Although proposals for treatment of quantum systems had been made even earlier, only a few serious calculations had heen carried out. Ruch calculations are generally more consuming of computer resources than for classical systems and no universal algorithm had--or indeed has yet-- emerged. However, with advances in techniques and in sheer computing power, Monte Carlo methods have been used with considerable success in treating quantum fluids and crystals, simple models of nuclear matter, and few-body nuclei. Research at several institutions suggest that they may offer a new approach to quantum chemistry, one that is independent of basis ann yet capable of chemical accuracy. That. Monte Carlo methods can attain the very great precision needed is itself a remarkable achievement. More recently, new interest in such methods has arisen in two new a~as. Particle theorists, in particular K. Wilson, have drawn attention to the rich analogy between quantum field theoty and statistical mechanics and to the merits of Monte Carlo calculations for lattice gauge theories. This has become a rapidly growing sub-field. A related development is associated with lattice problems in quantum physics, particularly with models of solid state systems. The~ is much ferment in the calculation of various one-dimensional problems such as the'Hubbard model.