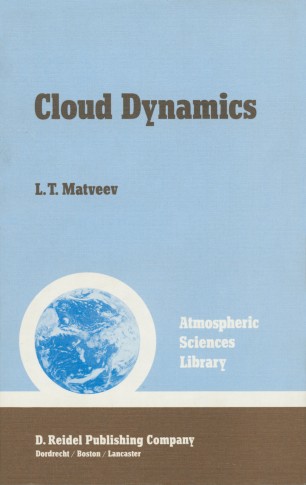 During recent decades a new field of study in atmospheric science has made its appearance - the dynamics of clouds. As the name implies, the subject matter of cloud dynamics includes the causes of cloud formation and the temporal development of clouds. At first, effort was concentrated mainly on devising models of the structure and development of convective clouds, and thus there exists considerable literature on this [9, 69, 88, 330, 411]. Although convective clouds are of great significance (thunder­ storm formation and very intense turbulence are associated with these clouds), they are observed much less frequently than other cloud types. For instance, the frequency of occurrence of strati­ form (frontal) clouds and wave clouds over the U.S.S.R. and Western Europe is more than 90% [2-4]. During the last 20 or 30 years there has been considerable success in studying the dynamics of stratiform clouds. Fundamental laws (equations) describing the formation, development, and dis­ sipation of these clouds (and also of fog) have been formulated, and also laws describing the formation of humidity and temperature fields in a turbulent medium. Hydrodynamic models of clouds and fog constructed on the basis of these equations have made it pos­ sible to formulate the fundamental regularities in the formation and evolution of large-scale cloud fields, and also to ascertain the structural features of clouds of various kinds. These topics are covered in Chapters 1-4 of this monograph.