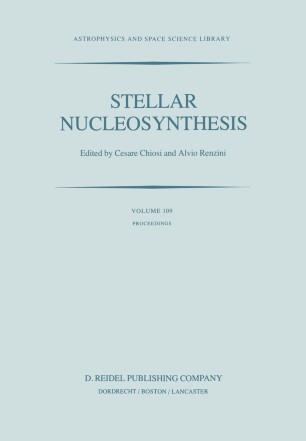 Proceedings of the Third Workshop of the Advanced School of Astronomy of the Ettore Majorana Centre for Scientific Culture, Erice, Italy, May 11–21, 1983

x about a sequence of reVlew lectures, each followed by contributed talks and discussions. The opening session was devoted to reviewing the most recent results concerning the determination of chemical abundances in particularly inte­ resting objects providing direct evidence for stellar nucleosynthesis (like planetary nebulae, supernovae and supernova remnants). In Session 2 recent results on some relevant nuclear reaction rates have been presented. Session 3 grouped the contributions concerning the quasi-static evolution of normal stars, its relevance for the nucleosynthesis of the varlOUS elements and isotopes, and the comparison of the evolutionary models with the observations. Session 4 addressed the important questions of identifying the precursors of both Type I and Type II supernovae, and of determining the detailed composition of the ejecta by explosive nucleosynthesis associated with these events. Finally, Session 5 was devoted to a presentation of recent calculations of the evolution of hypothetical pre-galactic very massive objects (in­ cluding their potential role in pre-galactic nucleosynthesis), and to reviewing the progress that has been made in understanding the chemical evolution of galaxies. The discussion during and after talks was spirited and contributed signi­ ficantly to the succes of the workshop. We regrett for not having been able of reporting it "in toto" in the proceedings. Nevertheless, we hope that what has been recorded may still give to the reader at least part of the excitement we have experienced during the ten days of the workshop.