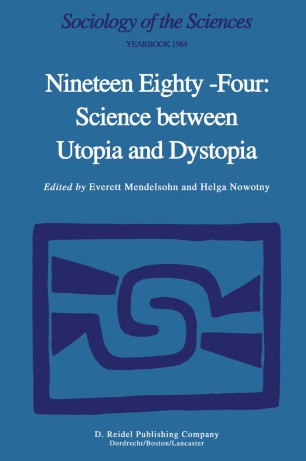 Part of the Sociology of the Sciences a Yearbook book series (SOSC, volume 8)

Just fifty years ago Julian Huxley, the biologist grandson of Thomas Henry Huxley, published a book which easily could be seen to represent the prevail­ ing outlook among young scientists of the day: If I were a Dictator (1934). The outlook is optimistic, the tone playfully rational, the intent clear - allow science a free hand and through rational planning it could bring order out of the surrounding social chaos. He complained, however: At the moment, science is for most part either an intellectual luxury or the paid servant of capitalist industry or the nationalist state. When it and its results cannot be fitted into the existing framework, it and they are ignored; and furthermore the structure of scientific research is grossly lopsided, with over-emphasis on some kinds of science and partial or entire neglect of others. (pp. 83-84) All this the scientist dictator would set right. A new era of scientific human­ ism would provide alternative visions to the traditional religions with their Gods and the civic religions such as Nazism and fascism. Science in Huxley's version carries in it the twin impulses of the utopian imagination - Power and Order. Of course, it was exactly this vision of science which led that other grand­ son of Thomas Henry Huxley, the writer Aldous Huxley, to portray scientific discovery as potentially subversive and scientific practice as ultimately en­ slaving.