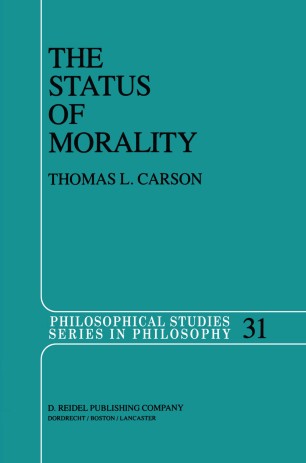 The Status of Morality

My interest in the issues considered here arose out of my great frustration in trying to attack the all-pervasive relativism of my students in introductory ethics courses at Virginia Polytechnic Institute and State University. I am grateful to my students for forcing me to take moral relativism and skepticism seriously and for compelling me to argue for my own dogmatically maintained version of moral objectivism. The result is before the reader. The conclusions reached here (which can be described either as a minimal objectivism or as a moderate verson of relativism) are considerably weaker than those that I had expected and would have liked to have defended. I have arrived at these views kicking and screaming and have resisted them to the best of my ability. The arguments of this book are directed at those who deny that moral judgments can ever be correct (in any sense that is opposed to mistaken) and who also deny that we are ever rationally com­ pelled to accept one moral judgment as opposed to another. I have sought to take their views seriously and to fight them on their own grounds without making use of any assumptions that they would be unwilling to grant. My conclusion is that, while it is possible to refute the kind of extreme irrationalism that one often encounters, it is impossible to defend the kind of objectivist meta-ethical views that most of us want to hold, without begging the question against the non-objectivist.