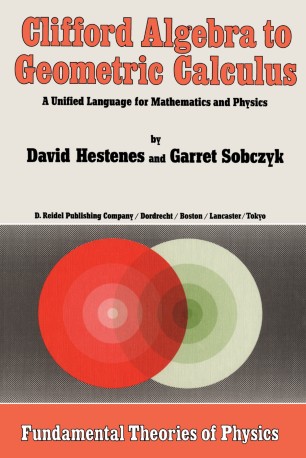 A Unified Language for Mathematics and Physics

Matrix algebra has been called "the arithmetic of higher mathematics" [Be]. We think the basis for a better arithmetic has long been available, but its versatility has hardly been appreciated, and it has not yet been integrated into the mainstream of mathematics. We refer to the system commonly called 'Clifford Algebra', though we prefer the name 'Geometric Algebm' suggested by Clifford himself. Many distinct algebraic systems have been adapted or developed to express geometric relations and describe geometric structures. Especially notable are those algebras which have been used for this purpose in physics, in particular, the system of complex numbers, the quatemions, matrix algebra, vector, tensor and spinor algebras and the algebra of differential forms. Each of these geometric algebras has some significant advantage over the others in certain applications, so no one of them provides an adequate algebraic structure for all purposes of geometry and physics. At the same time, the algebras overlap considerably, so they provide several different mathematical representations for individual geometrical or physical ideas.

David Hesteness is awarded the Oersted Medal for 2002.
The Oersted Award recognizes notable contributions to the teaching of physics. It is the most prestigious award conferred by the American Association of Physics Teachers.

`... future authors will owe a great debt to Professors Hestenes and Sobczyk for this pioneering work.' Foundations of Physics, 16, 1986
`I repeat that GC enriches and simplifies everything it touches, not just on an advanced level but also, and perhaps even more so, on an elementary level. I am convinced that GC should be taught to undergraduate in place of the traditional approaches to vector algebra and analysis.' James S. Marsh in American Journal of Physics
`If the physics community seizes the opportunity represented by this book, and I hope it does, this book will become the handbook and the bible of GC.' American Journal of Physics, 53:5 (1985)