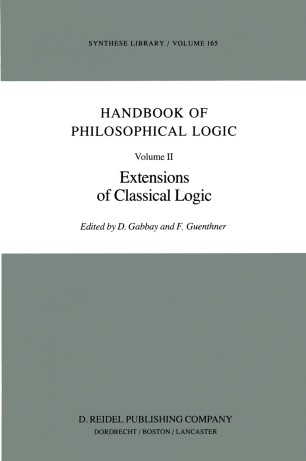 The chapters in the present volume go beyond 'classical' extensional logic with respect to one important factor: they all include among the semantic constituents representations of so-called 'possible worlds'. The inclusion of such 'indices' has turned out to be the semantic mainstay in dealing with a number of issues having to do with intensional features of natural and artificial languages. It is, of course, an open question whether 'possible world' semantics is in the final analysis the proper solution to the many problems and puzzles intensional constructions raise for the logical analysis of the many varieties of discourse. At present, there seem to be about as many opponents as proponents with regard to the usefulness of having the semantics of intensional languages based on possible world constructs. Some attempts to come to grips with intensional phenomena which are not couched in the possible world framework are discussed in Volume IV of the Handbook. Chapter 1 is an extensive survey of the main systems of (propositional) modal logic including the most important meta-mathematical results and the techniques used in establishing these. It introduces the basic terminology and semantic machinery applied in one way or another in many of the subsequent chapters. Chapter 2 discusses the most significant developments in (propositional) tense logic which can of course be regarded as a special kind of modal logic, where the possible world indices are simply (ordered) moments of time.