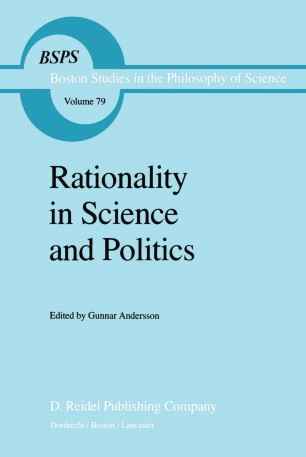 Rationality in Science and Politics

Part of the Boston Studies in the Philosophy of Science book series (BSPS, volume 79)

This remarkable collection of essays, diverse but united by the theme of critical reasoning, testifies to the attention and respect paid by the authors to the philosophical career of Gerard Radnitzky. We, too, greet Professor Radnitzky for his decades of intellectual labor devoted to the establishment of rational analysis of human problems. Not least of his concerns has been to understand what it is to be rational, to disentangle the apparently rational and the genuine, to separate dogma from justified belief, to cherish imagination while seeking its test. If Radnitzky has long been known for his careful elaboration of the spectrum of modem approaches to epistemology, those who have gathered to celebrate his work in this volume will also be widely known for their own writings on this matter of critical methodology. Their signposts (or are they warning lights?) will be familiar to thoughtful philosophers and scientists, and they appear as queries as we read these papers: the rational heuristic and the irrational heuristic? accepting the fallible? differing societies but one rational cognitive practice? accepting evidence which is placebogenic? choosing among the incommensurables? what remains of the logic of demarcation? purpose in nature? progress of science? rationality in politics? a humane reasonableness and a critical rationalism? Gunnar Andersson sets the focus well for the reader. We need not choose between dogmatism and relativism, he argues. And then he tells the political lesson: we might avoid both anarchy and despotism.