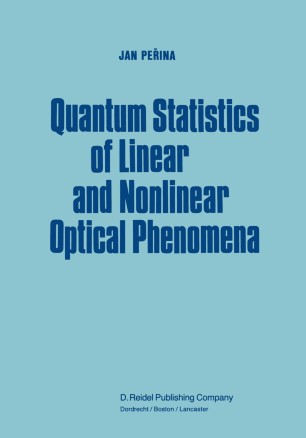 The quantum statistical properties of radiation represent an important branch of modern physics with rapidly increasing applications in spectroscopy, quantum generators of radiation, optical communication, etc. They have also an increasing role in fields other than pure physics, such as biophysics, psychophysics, biology, etc. The present monograph represents an extension and continuation of the previous monograph of this author entitled Coherence of Light (Van Nostrand Reinhold Company, London 1972, translated into Russian in the Publishing House Mir, Moscow 1974) and of a review chapter in Progress in Optics, Vol. 18 (E. Wolf (Ed.), North-Holland Publishing Company, Amsterdam 1980), published just recently. It applies the fundamental tools of the coherent-state technique, as described in Coherence of Light, to particular studies of the quantum statistical properties of radiation in its interaction with matter. In particular, nonlinear optical processes are considered, and purely quantum phenomena such as antibunching of photons are discussed. This book will be useful to research workers in the fields of quantum optics and electronics, quantum generators, optical communication and solid-state physics, as well as to students of physics, optical engineering and opto-electronics.