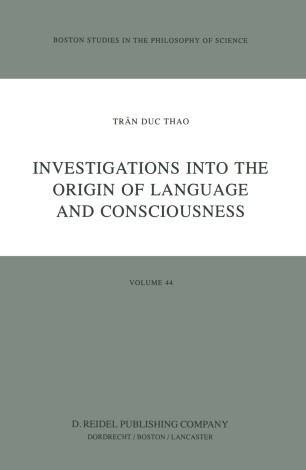 Investigations into the Origin of Language and Consciousness

Part of the Boston Studies in the Philosophy of Science book series (BSPS, volume 44)

Tran Duc Thao, a wise and learned scientist and an eminent Marxist philoso­ pher, begins this treatise on the origins of language and consciousness with a question: "One of the principal difficulties of the problem of the origin of consciousness is the exact determination of its beginnings. Precisely where must one draw the line between the sensori-motor psychism of animals and the conscious psychism that we see developing in man?" And then he cites Karl Marx's famous passage about 'the bee and the architect' from Capital: ... what distinguishes the worst architect from the best of bees is this, that the architect raises his structure in the imagination before he erects it in reality. At the end of every labor process, we get a result that already existed in the imagination of the laborer at its commencement. (Capital, Vol. I, p. 178, tr. Moore and Aveling) Thao follows this immediately with a second question: "But is this the most elementary form of consciousness?" Thus the conundrum concerning the origins of consciousness is posed as a circle: if human consciousness pre­ supposes representation (of the external reality, of mental awareness, of actions, of what it may), and if this consciousness emerges first with the activity of production using tools, and if the production of tools itself pre­ supposes representation - that is, with an image of what is to be produced in the mind of the producer - then the conditions for the origins of human