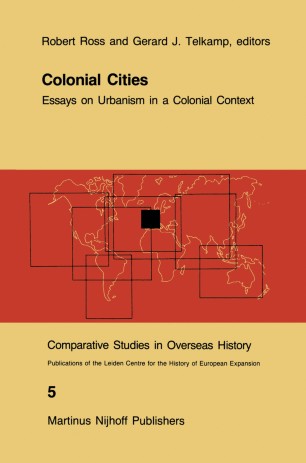 by ROBERT ROSS and GERARD J. TELKAMP I In a sense, cities were superfluous to the purposes of colonists. The Europeans who founded empires outside their own continent were primarily concerned with extracting those products which they could not acquire within Europe. These goods were largely agricultural, and grown most often in a climate not found within Europe. Even when, as in India before 1800, the major exports were manufactures, in general they were still made in the countryside rather than in the great cities. It was only on rare occasion when great mineral wealth was discovered that giant metropolises grew up around the site of extraction. Since their location was deter­ mined by geology, not economics, they might be in the most inaccessible and in­ convenient areas, but they too would draw labour off from the agricultural pursuits of the colony as a whole. From the point of view of the colonists, the cities were therefore in some respects necessary evils, as they were parasites on the rural producers, competing with the colonists in the process of surplus extraction. Nevertheless, the colonists could not do without cities. The requirements of colonisation demanded many unequivocally urban functions. Pre-eminent among these was of course the need for a port, to allow the export of colonial wares and the import of goods from Europe, or from other parts of the non-European world, in the country-trade as it was known around India.