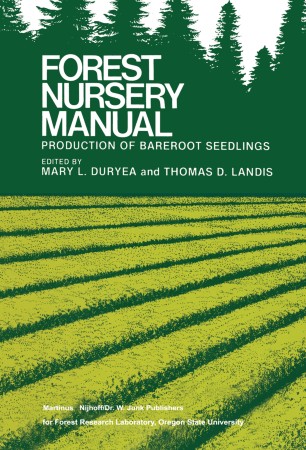 ing damage ranged from odor. to general visual appearance. Attributes of seedling quality are categorized as either to cutting buds. to scraping bark to detect dead cambium. performance attributes (RGP. frost hardiness. stress resistance) One nursery reported using frost hardiness as an indicator of or material attributes (bud dormancy. water relations. nutrition. when to begin fall lifting. but none reported using it as an morphology). Performance attributes are assessed by placing indicator of seedling quality before shipping stock to customers. samples of seedlings into specified controlled environments and evaluating their responses. Although some effective short­ 23.4.3 Stress resistance cut procedures are being developed. performance tests tend Only three nurseries measure stress resistance. They use to be time consuming; however, they produce results on whole­ the services of Oregon State University and the test methods plant responses which are often closely correlated with field described in 23.2.3. One nursery reported that results of stress performance. Material attributes. on the other hand. reflect tests did not agree well with results of RGP tests and that RGP only individual aspects of seedling makeup and are often correlated better with seedling survival in the field. Most stress poorly correlated with performance. tests are conducted for reforestation personnel rather than for Bud dormancy status seems to be correlated. at least nurseries.

`The Manual is an outstanding contribution to the literature. All who have been involved in its production are to be congratulated.'
The Forest Chronicle (October 1984)