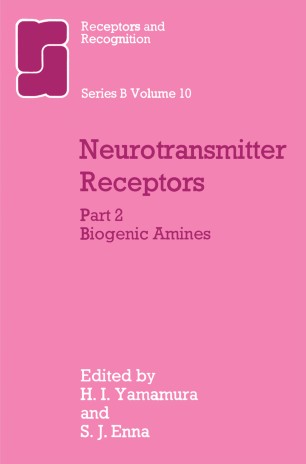 Part of the Receptors and Recognition book series (RERE, volume 10)

Since the discovery that neuronal transmission can be chemically mediated, a large number of compounds have been found in the mammalian central nervous system which appear to function as neurotransmitter agents. Recently, electro physiological and biochemical methods have been developed which have enabled neuroscientists to classify better the myriad of neurotransmitter receptor sites in brain and to study their properties in finer detail. As a result of these investigations, a significant number of new discoveries have been made about the mechanisms involved in neurotransmitter receptor interactions, the role neurotransmitters play in the actions of pharmacological agents and in the pathogenesis of various neuropsychiatric disorders. The present two volume text was compiled to summarize the information relating to the physiological, biochemical, pharmacological and functional characteristics of neurotransmitter receptor sites. While emphasis is placed on neurotransmitter receptors in the mammalian central nervous system, the characteristics of these receptors in other species, both vertebrate and invertebrate, are also discussed where appropriate. While these books cover the major classes of putative neurotransmitters - amino acids, peptides and biogenic amines - and are therefore broad in scope, each is discussed in a concise fashion to highlight the major points of historical and contemporary interest. In addition to outlining data, each chapter addresses current theories relating to the various aspects of receptor properties and function in an attempt to reveal the directions of future research and as a stimulus for other workers in the field.