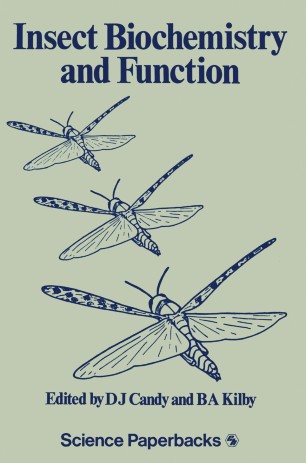 There has been a considerable upsurge in interest in insect bio­ chemistry and physiology in recent years and this has been reflected in a notable expansion in the number of original papers in this field. Whereas insect physiology has tended to receive ample attention from reviewers, the same has not always been true for the more biochemical aspects of insect research. This book is a venture to help redress the balance. No attempt has been made to cover all aspects of insect biochemistry, but rather a few topics have been selected which seemed to us to merit a review at the present time. One reason for this increased interest in insect biochemistry is perhaps the growing realization that insects can be very useful organisms to act as model systems for the experimental study of general biochemical principles. One remembers, for instance, that Keilin's perceptive observations on the flight muscles of living bees and wax moths led to his discovery of the cytochromes. The fundamental unity of biochemistry has long been accepted as a dogma by the faithful and the insect kingdom provides no exception to it. The main biochemical processes in insects are being revealed as essentially the same as in other life forms but, as so often found in comparative biochemistry, there are interesting variations on the central theme.