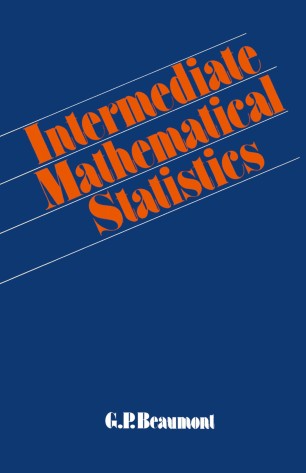 This book covers those basic topics which usually form the core of intermediate courses in statistical theory; it is largely about estima­ tion and hypothesis testing. It is intended for undergraduates following courses in statistics but is also suitable preparatory read­ ing for some postgraduate courses. It is assumed that the reader has completed an introductory course which covered probability, random variables, moments and the sampling distributions. The level of mathematics required does not go beyond first year calculus. In case the reader has not acquired much facility in handling matrices, the results in least squares estimation are first obtained directly and then given an (optional) matrix formulation. If techniques for changing from one set of variables to another have not been met, then the appendix on these topics should be studied first. The same appendix contains essential discussion of the order statistics which are frequently used for illustrative purposes. Introductory courses usually include the elements of hypothesis testing and of point and interval estimation though the treatment must perforce become rather thin since at that stage it is difficult to provide adequate justifications for some procedures-plausible though they may seem. This text discusses these important topics in considerable detail, starting from scratch. The level is nowhere advanced and proofs of asymptotic results are omitted. Methods deriving from the Bayesian point of view are gradually introduced and alternate with the more usual techniques.