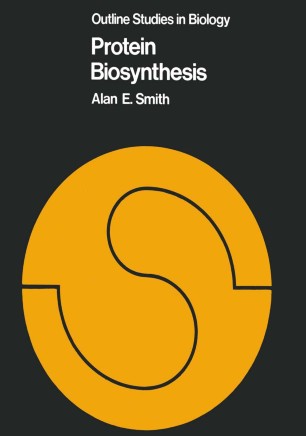 Part of the Outline Studies in Biology book series (OSB)

46 3. 2 mRNA metabolism 47 3. 3 Initiation complex formation 3. 3. 1 Binding of initiator tRNA 47 3. 3. 2 Binding of messenger RNA 50 3. 4 Elongation 56 3. 5 Termination of protein biosynthesis and post-translational modification 59 RNA phage protein synthesis 61 3. 6 References 63 Index 64 1 Introduction possible control processes operating to adjust 1. 1 The problem protein synthesis to the needs of the cells and The discovery that the genetic material of organism. It will be assumed that the reader has living organisms is DNA, and the later de­ some knowledge of molecular biology in gen­ monstration that the DNA molecule is a eral and protein biosynthesis in particular, but double helix were both great milestones in twentieth century science, and formed the by way of introduction each of the major molecules and stages of the process will be foundation of the new discipline of molecular described in simple terms, and in subsequent biology. But even after these momentous dis­ chapters each will be discussed again in coveries, the detailed mechanism by which such genetic material could be expressed as the struc­ greater depth. tural and catalytic proteins which play so im­ portant a role in the functioning of all living 1. 2 Overall steps in protein biosynthesis The information encoded in the two comple­ cells was still not obvious.