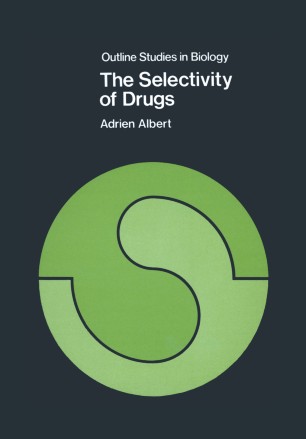 The Selectivity of Drugs

Part of the Outline Studies in Biology book series (OSB)

1. 1 What is Selectivity? purpose, and crop protective agent for the A biologically-active substance is said to be second, but there is no fundamental difference selective if it strongly affects certain cells with­ of principle in their mode of action. out causing any change in others, even when the Drug therapy has two, fundamentally two kinds of cells are close neighbours. In living opposed divisions. The first of these strives to organisms, there are many substances, often improve the action of one of the cell's natural quite small molecules, which have been chosen agents by modifying the molecule in order to for their specificity. This choice has been made localize or intensify its action. For instance, under the strong pressure of natural selection, the solubility can be decreased to make it form unhurried by any consideration of time. Such a deposit, or a change is made so that it becomes chemical compounds operate the metabolism a poorer fit on the naturally-occurring destruc­ of the cells and tissues, and ensure their health, tive enzyme. Both of these devices have proved survival, and reproduction. Important among useful in therapy, e. g. with steroid hormones. the smaller of these selective molecules are Such drugs, which seek to improve on Nature vitamins, coenzymes, hormones, neurotrans­ by performing more desirably, are called mitters, inorganic ions, nutritional fragments, agonists.