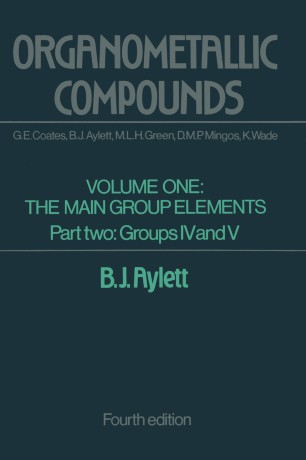 A very large number of organo derivatives is formed by the Group IV ele­ ments silicon, germanium, tin, and lead. In comparing the general properties of these elements, Table 1. 1 shows that the first ionization energies decrease (though not in a regular way) with increase in size and atomic number, con­ sistent with the general increase in metallic character of the elements. Electro­ negativity values (which have been the subject of considerable controversy) show no clear trend. Although purely inorganic compounds of tin(n) and leaden) are well known, almost all organo Group IV derivatives show an oxidation state of IV. Bonds to carbon become weaker on passing from silicon to lead, as do the element-element bonds themselves. With any particular element M (M = Si, Ge, Sn, or Pb), there is a small decrease in bond energy in the order: M-Ph > M - Me > M - Et. Although accurate data for organo derivatives are lacking, strengths of bonds to other elements probably decrease in the order: M-F> M-O > M-CI > M-H ~ M-N ~ M-S ~ M-Br > M-I, while for a particular element X, the order is: Si-X > Ge-X > Sn-X > Pb-X. It is therefore understandable that reactions leading to Si-F, Si-O, or Si-CI bonds are especially favoured in a thermodynamic sense.